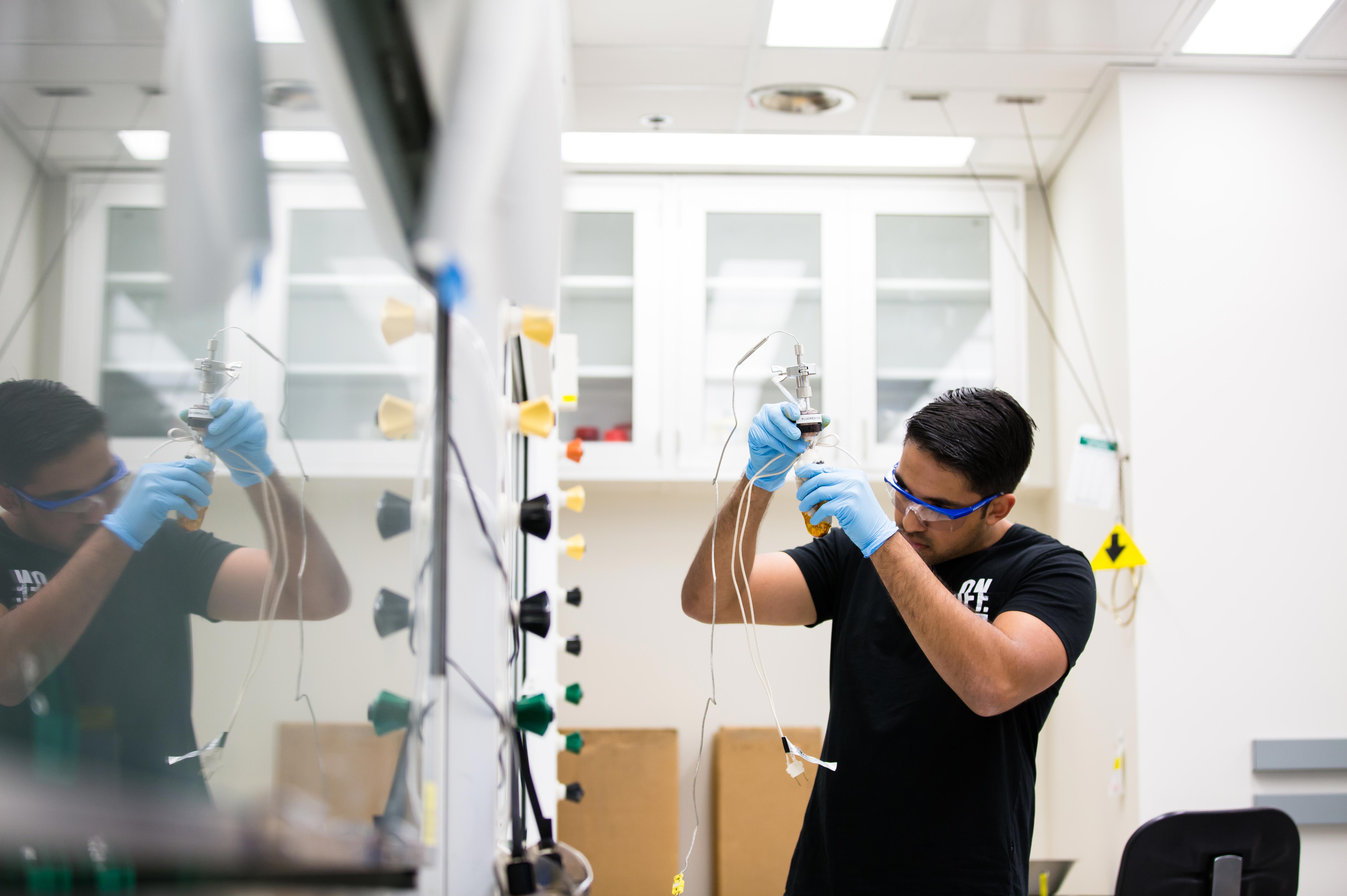 A technology that can print pure, ultra-precise doses of drugs onto a wide variety of surfaces could one day enable on-site printing of custom-dosed medications at pharmacies, hospitals and other locations. The technique, which was developed at the University of Michigan, can print multiple medications into a single dose on a dissolvable strip, microneedle patch or other dosing device. The researchers say it could make life easier for patients who must now take multiple medications every day. The work could also accelerate drug development.
A new study led by Max Shtein, professor of materials science and engineering, and Olga Shalev, a recent graduate who worked on the project while a doctoral student in the same department, showed that the pure printed medication can destroy cultured cancer cells in the lab as effectively as medication delivered by traditional means, which rely on chemical solvents to enable the cells to absorb the medication. Their study is published in the journal Nature Communications.
“A doctor or pharmacist can choose any number of medications, which the machine would combine into a single dose,” Shtein said. “The machine could be sitting in the back of the pharmacy or even in a clinic.”
The technique was developed through a collaboration between the Michigan Engineering departments of chemical engineering and biomedical engineering, as well as the College of Pharmacy and the Department of Physics in the College of Literature, Science, and the Arts.
The researchers adapted a technology from electronics manufacturing called organic vapor-jet printing. One key advantage of the technique is that it can print a very fine crystalline structure over a large surface area. This helps printed medications dissolve more easily, opening the door to a variety of potential new drugs that today are shelved because they don’t dissolve well when administered with conventional approaches, including pills and capsules.
“Pharma companies have libraries of millions of compounds to evaluate, and one of the first tests is solubility,” Shtein said. “About half of new compounds fail this test and are ruled out. Organic vapor jet printing could make some of them more soluble, putting them back into the pipeline.”
The process begins by heating the active pharmaceutical ingredient – usually a powder – and evaporating it to combine it with a stream of heated, inert gas like nitrogen. The evaporated medication travels, along with the gas, through a nozzle pointed at a cooled surface. The medication then condenses, sticking to the cooled surface in a thin crystalline film. The formation of the film can be tightly controlled by fine-tuning the printing process. The process requires no solvents, no additives and no post-processing.
“Organic vapor jet printing may be useful for a variety of drug delivery applications for the safe and effective delivery of therapeutic agents to target tissues and organs,” said Geeta Mehta, the Dow Corning Assistant Professor of Materials Science and Engineering and Biomedical Engineering and a co-author on the paper.
The tight control over solubility may also be useful later in the drug testing process, when potential new drugs are applied to cultured cells in a lab. Today, most compounds must be dissolved in a chemical solvent before they’re applied to cells. The new technique could enable printed medications to dissolve easily in the water-based medium used to culture cells, without the need for a solvent.
“When researchers use solvents to dissolve drugs during the testing process, they’re applying those drugs in a way that’s different from how they would be used in people, and that makes the results less useful,” said Anna Schwendeman, an assistant professor of pharmaceutical sciences at U-M and an author on the paper. “Organic vapor jet printing could make those tests much more predictive, not to mention simpler.”
While printing mass-market drugs is likely years away, Shtein believes that the drug characterization and testing applications may come to fruition more quickly – internally in pharmaceutical companies.
“One of the major challenges facing pharmaceutical companies is speed to clinical testing in humans,” said Gregory Amidon, a research professor in the U-M College of Pharmacy and an author on the paper. “This technology offers up a new approach to accelerate the evaluation of new medicines.”
The team is exploring additional applications for the technology and plans to collaborate with experts in pharmaceutical compound design and manufacturing, as well as those working on treatments. Eventually, they envision vapor jet printing being scaled to mass production, including roll-to-roll continuous manufacturing.

IPI was established by professionals with over 30 years of experience in the Pharmaceutical and Life sciences publishing sectors. Peer-Reviewed, Contemporary, Authoritative